Crafting a Speculative Space in a Pandemic by Betti Marenko

As the PI of the Future Philosophical Pills I found myself in the unexpected and slightly paradoxical situation of being right in the middle of a project about future speculation, the unknown and landscapes of uncertainty when the project  was derailed by the onset of the current pandemic. Suddenly, the very instrument (the Future Philosophical Pills) that we were developing at UAL with the purpose of amplifying the range of potential futures that can be imagined, anticipated and speculated upon, hit, quite literally a wall. With Covid-19 brutally rewriting our present, the notion of future we were handling in our intellectual output had to be re-assessed.

It’s March 2020. The UAL team is due to host Speculative Space, a three-day training event for a large international group of design educators at the Design Museum in London. A key purpose of this event is to present the Future Philosophical Pills and introduce them to our colleagues with a series of hands-on training sessions. The idea is to live-test the deck of cards we have created in the previous months (through a series of iterative workshops with our postgraduate students – see Silke Lange’s blog post “Hacking Futures – Futures Hacking: reflection on co-created futures”). The cards offer a way to interrogate and craft potential futures, using an inquiry into chance (the random draw of the card) as an opportunity to build meaningful, unexpected and open-ended trajectories of knowledge production around futures. We have designed print-and-play card prototypes and assembled a number of hard copies of the decks for immediate play. We are ready. 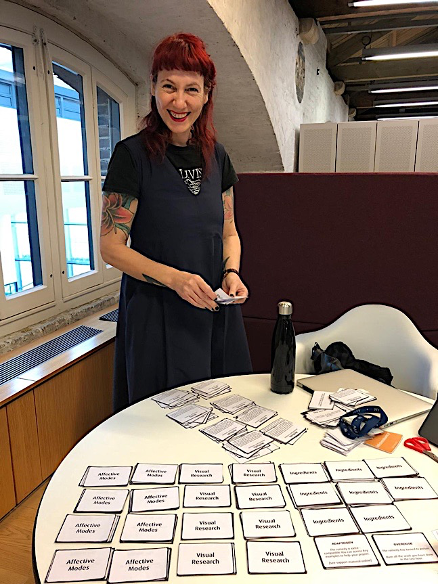 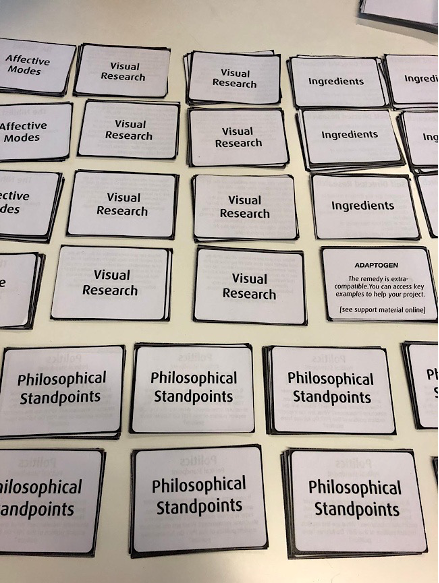 The pandemic forces us to put our future-crafting strategies on hold.

Our Speculative Space event is cancelled. Indefinitely postponed. All our energies and resources (both institutional and individual) are diverted to emergency remote teaching. The entire world enters suspended animation. The lesson cannot be more ruthless. No, the future cannot be predicted. Yes, future-proofing is an oxymoron.

There is a certain irony (which doesn’t escape us) in an endeavour like the Future Philosophical Pills being disrupted by an unanticipated global event. A twist of fate perhaps. What matters, though, is that it both humbled and spurred us in renewing our work around futures. If it is true that how we think about the future cannot protect us from the pure contingency of its manifestations, what it can do is to amplify the range of intellectual, imaginative, anticipatory, pragmatic means at our disposal to craft appropriate, enriching, and most of all nimble responses. 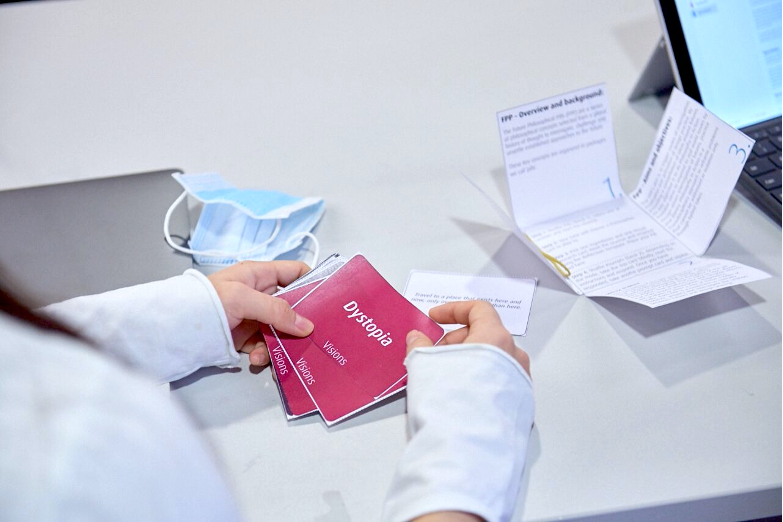 Like everyone hit by the pandemic, our team had to adapt, rethink and reorganize. Deadlines were being pushed forward to accommodate sudden and unrelenting demands on our time and resources, both professional and personal.

As an educator involved in teaching large international cohorts of product design students at Central Saint Martins, I quickly realised the huge difference between emergency remote teaching and the complexity of the demands of remote learning, remote collaboration, and remote community building. Writing this reflection in January 2021, if there is one thing that the past ten months have made abundantly clear it is that teaching and learning online is not and cannot be simply a matter of uploading the same content only to a different medium/platform. We are dealing with an entirely different landscape that requires rethinking methods, fine tuning our modus operandi, conventions around temporalities and scale, even the rationale behind the initiatives we are hosting, and certainly the modes of engagement we put forward and expect from the participants (students, learners, peers).

When Speculative Space finally happened in October 2020 not only was the world a rather different place; our shared expectations of what an academic gathering with a focus on building a pedagogical experience had also morphed to adjust to the new normal. What is more, the palpable lack of control evidenced by the pandemic had the effect of unhinging those notions of the future as a somewhat ‘chartable’ landscape. Suddenly one of the key drives of our project – how to use uncertainty as a material to work with, and deploy the unknown as an opportunity to create meaning – became a goal (or at least a buzzword) shared world-wide. Thus, Speculative Space shifted from being the intellectually on-trend title of an academic future-oriented event; it became the emblematic qualifier of a new present. What emerged was the realisation that a radical rethinking of pedagogical instruments, epistemological methods, and ontological underpinnings of the ‘future’ itself was needed. 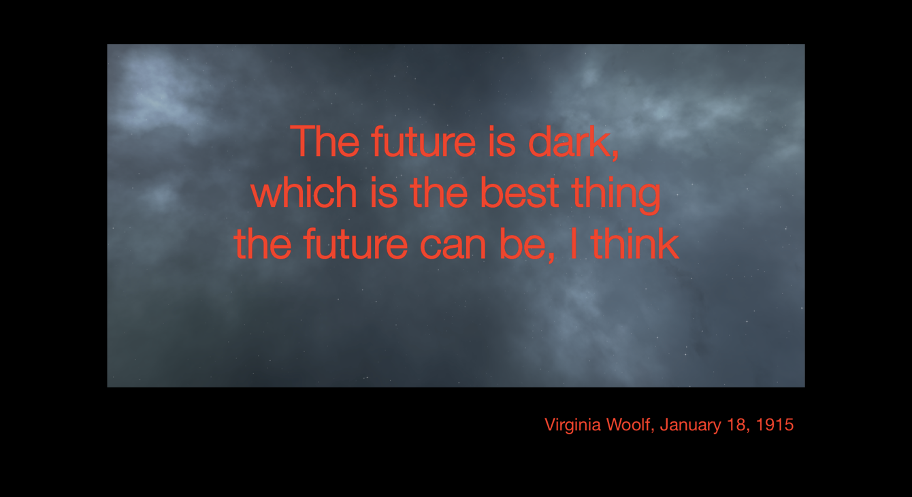 Speculative Space was hosted as an entirely remote event over two days in October 2020. This meant drastic adjustments to the planned structure, content and format. Our team used a combination of digital platforms to deliver it: MS Teams (with different channels for each working group), Miro boards (for collaborative workshop activities) and Simmer (hosting a prototype of the interactive Future Philosophical Pills). In fact, the whole event may be described as a prototype of sort, as none of us had ever hosted, produced and implemented a multiplatform event of this kind. Undeniably, there were technical challenges and the learning curve was steep. Still, the event managed to mobilize the content we had planned, and engage participants in working their way through the deck of cards, debating the intersection of futures with some of the key concepts proposed by the cards, and furnishing us with feedback for iteration. 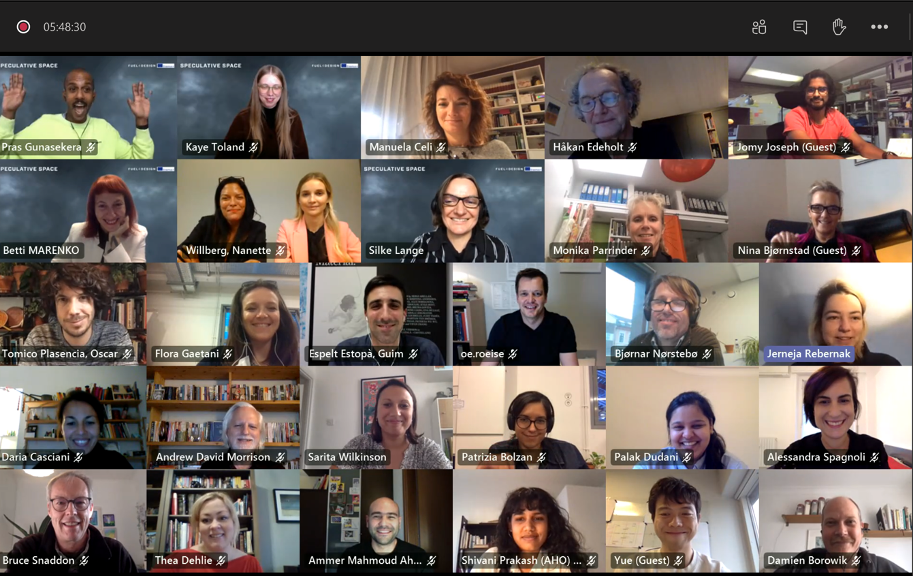 Since then, between October 2020 and January 2021, I have hosted several more Future Philosophical Pills workshops in a wide range of contexts, and scale: embedded as tailored course material for Product and Industrial Design undergraduate students; as part of the Politecnico di Milano-hosted Thinkathon for doctoral students; as brainstorming/speed-dating activity to kickstart the collaborative Hybrid Futures Hackathon part of the Digital Innovation Season at Central Saint Martins; as prompting/reflective tool for the postgraduate and PhD students at Tokyo Institute of Technology enrolled in my course Hybrid Futures: Designing for Uncertainty, Designing for the Post-Anthropocene. In particular, within the highly transdisciplinary context offered by Tokyo Institute of Technology the Future Philosophical Pills participate to the ongoing research around hybrid methodologies, across art and design and science and technology, bringing together practical philosophy, the critique of technology and ‘future-crafting’[1].

The salient characteristic of this approach concerns working at the hinge of the speculative and the pragmatic to develop intellectual interrogations that can scaffold tangible design-led interventions, which in turn are able to feed back onto speculation. It is important to stress this point: the speculative and the pragmatic are not opposed to each other. Pragmatic doesn’t mean practical as opposed to speculative or theoretical. Here I draw on what philosopher Brian Massumi calls speculative pragmatism[2]: how we stay open to invention and future making (speculative) while staying close to what is happening, the how, the method (pragmatism). The ‘how’ is crucial. It means that philosophy in action is in the business of activating ideas through prototyping techniques that engage with what does not exist yet; that turn uncertainty into modes of knowing; that use uncertainty as an opportunity to create meaning. This is an approach that is not afraid to embrace the unknown, and that boldly asks us to generate multiple routes of “figuring out”. It is precisely this capacity that has been thrown into stark relief in the course of this project in 2020. Not only did it turn Speculative Space into a (unexpected) meta-project. It made us alert, more than ever, to the fact that our instruments of knowledge-production are not just reflecting the contingency of the world, they are that very contingency.